Incentive tour and conference in Karlskrona

We had a privilege to organize an incentive tour combined with a conference in Karlskrona, Sweden for Convatec Company last June. The entertainment started on board of a ferry to Sweden. The group enjoyed the all-inclusive dinner buffet and later dominated the disco floor in C-View Bar.

The entertainment lasted until dawn and everybody welcomed a new day in Karlskrona with enthusiasm and curiosity. We started with a sightseeing walk of the city where the group saw the major places of interest in Karlskrona. After lunch in the hotel we went to a fishing centre upon the Ödevaten Lake. The owners of the centre welcomed us with tasty freshly pressed apple juice. Then we went to a forest glade where we enjoyed rhubarb cake with homemade whipped cream and delicious coffee – both prepared on a bonfire. Then the group was divided into teams and each of them took up different activity. There was canoeing, pike and perch fishing, bathing in the lake and in wooden tubs placed on a jetty, relaxing in sauna on a floating raft. After the activities we started preparing our dinner. Thanks to the owners of the centre it went smoothly. We baked Swedish crispy bread on a bonfire, we prepared salmon with juniper berries, a huge pan with moose and deer goulash, vegetarian dish of chanterelles and salad with lingonberry. All was delicious. But the most important moment of the evening was watching Poland play against Northern Ireland in soccer.

The second day was very busy. The group partook in a conference. In the evening there was a surprise – dinner and team building activities in Kastellet fortress situated on the Aspö Island. During the cruise to the island the group admired Karlskrona seen from the water side and a view of skerries. After having a short walk to the fortress the group faced a task requiring some skills and knowledge of Sweden. The teams were to find 20 letters hidden in the fortress and answering the questions from the letters. All the letters were found and almost all the questions were responded by the teams. The winning team was ‘The Deer’ who left the Island with a prize: books by Swedish queen of detective stories – Camilla Läckberg. Afterwards there was dinner served within mysterious fortress walls. The group enjoyed the stay so much that we almost missed the return ferry to Kalrskrona.

The third day was a continuation of the conference and a return cruise to Gdynia.

If you wish to have a similar itinerary for your company – write us – info@hittheroad.pl 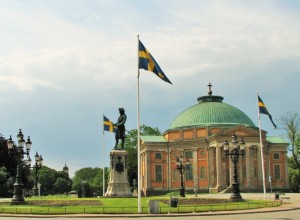